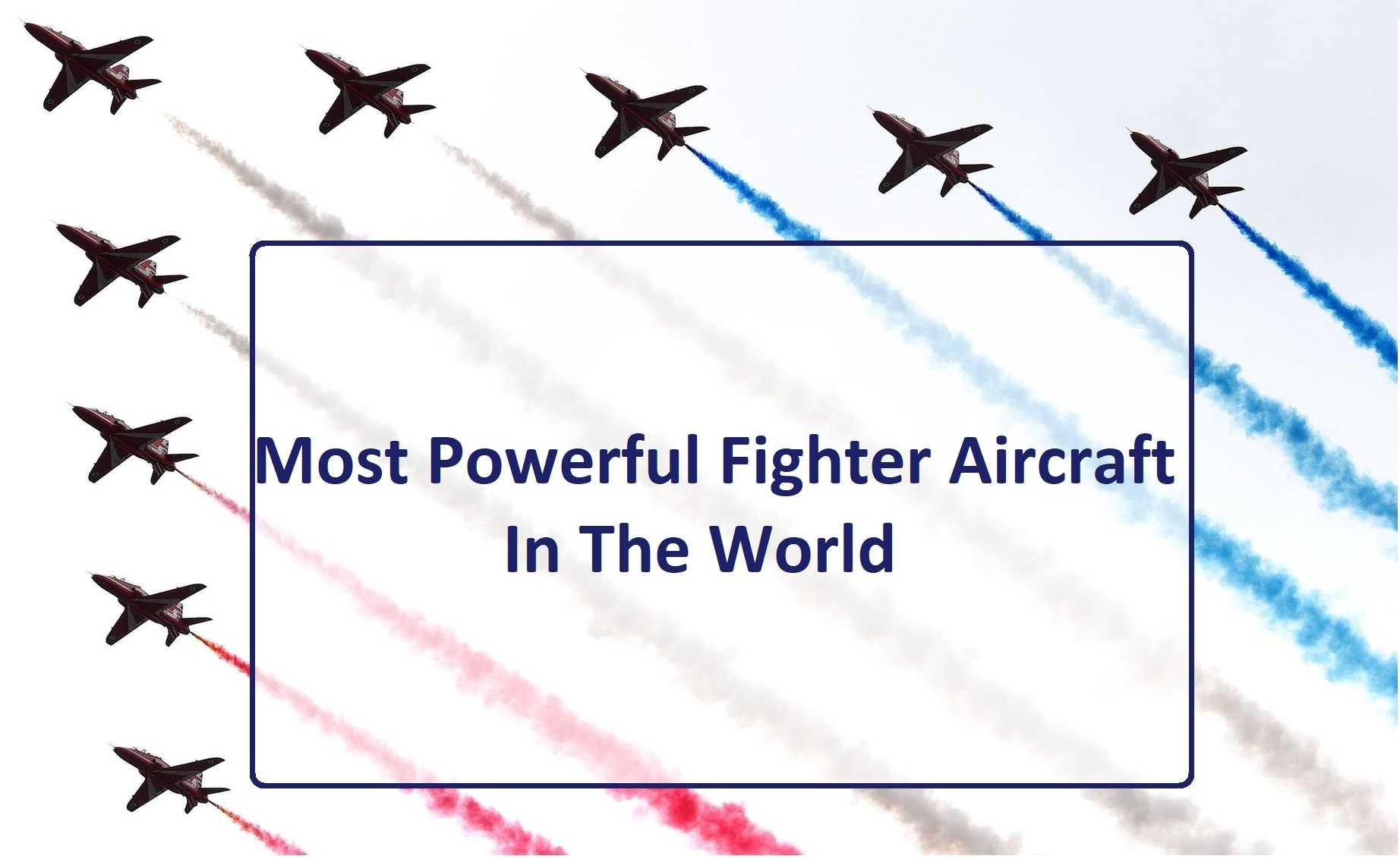 In terms of sheer numbers of aircraft, the USA leads the way, but that’s not to say that other countries haven’t developed some impressive flying machines designed to protect and serve the populace. The most recent report on the largest defense budgets by country puts the U.S. at the top by a long way, followed by China, Russia, Saudi Arabia, India, France and the UK. Not surprisingly, many of the leading fighter jets were developed in those countries.

According to defense pundits these are the Currently top 10 fighter aircraft:

Which is The Best Fighter Aircraft in The World?

According to defense experts, the Lockheed Martin F-22 Raptor is the most powerful fighter plane in the world. But As not all fighter jets are alike, and as the superlative jet is an ongoing matter of debate, our below list is in no particular order. Today you will decide what’s best according to the specifications of jets and tell your opinion in the comment box.

Following are some most lethal jets in the world those scare its enemies most.

Taking off from where the Sukhoi Su-27 left off, the Su-35 is Russia’s main fighter jet. The single seat super maneuverable multi-role fighter first appeared at a Russian air show in 2007 and was hailed by the Russian Military of Defense as the greatest fighter jet ever created. Russia is building them as we speak, and many of the new 50-75 million dollar units will be exported. To fly the jet costs around 35,000 dollars an hour. As for specs, it has a top speed of around 1,726 miles per hour (2,777 kph) and a range of 1,940 miles (3,122km). Just so you know, range is how far the fighter jets can fly between take-off and landing. It has a service ceiling of 59,000 ft (18,000 meters), meaning how high it can fly and be fully-operational. It’s extolled for its thrust-vectoring strength, capable of possibly unmatched maneuverability. While its electronic warfare system is classified information, we know its infrared-search-and-track sensors can scan other planes’ heat signatures from an impressive range. It carries a bounty of weapons, including air-to-air missiles, rockets, bombs, and a 30mm GSh-30 internal cannon with 150 rounds.

Needless to say, all of these fighter planes carry weapons capable of shooting pretty much anything out of the sky. The question is, can they do it before something else sees them? The Rafale’s omnirole capabilities, according to its own designers, make it the “poster child” of transformation Fighter jets. This means it is capable of switching from a strike force mission to a show of strength mission. Each unit costs around 86 million dollars, depending on which model, and it costs around 28,000 dollars an hour to fly. It’s capable of a top speed of around 1,200 miles per hour (1,912kph) and has a range of around 2,000 miles (3,218 km). Its service ceiling is 50,000 ft (15,240 meters). It has air-to-air and air-to-ground missiles, a GIAT 30/M791 auto cannon with 125 rounds and also carries an ASMP-A nuclear missile. It has excellent radar and onboard electronic warfare system, with one military pundit saying it “has a significant advantage in situational awareness over the F-35.”

The USA’s much praised F-35 multi-role stealth fighter has been called the stealthiest of stealth aircraft, although some comparisons make it a fairly equal match to the Rafale. One report tells us, however, that the F-35 will detect the Rafale at 70.2-92.5 miles (113-149 km), while the Rafale will detect the F-35 at 40.3-43.4 miles (65-70km). The F-35 three models are built for short take-off, normal take-off, and catapult assisted take-off. They cost from 95.6-122.8 million dollars, and are around 42,169 dollars per hour to fly. The F-35’s expense has resulted in some pundits saying it is too expensive to lose. It can reach speeds of 1,200 miles per hour (1,912kph) and has a range of 1,367 miles (2,200km). Its service ceiling is 60,000 feet (18.288 meters). What makes it so special is its electronic warfare suite, which some have said means it’s a flying hacker like no other. It’s able to jam other planes’ signals perhaps better than foes and has unprecedented situational awareness. Some experts say its pilots have a God-like advantage over enemies in terms of awareness.

One of the reasons the U.S. is pushing the advancement of the former fighter plane is partly due to other countries pushing their own ultra-modern fighter jets. One of which is China’s fairly new J-20 multi-role stealth fighter. This 110 billion dollar aircraft has a top speed of 1,305 miles per hour (2,100 kph) and according to one U.S. military analyst has “longer range, more internal fuel capacity, and larger internal weapons capability” than the F-35 and the F-22. The same analyst also goes on to say that the J-20 probably does not have the same hyper-connectedness that the F-35 has. What it is capable of is still somewhat of a mystery. National Interest could not provide all the specs for the J-20, but did say in 2017 that “China will not enjoy military superiority over the United States but its latest stealth fighter moves it closer to regional hegemony.”

The aforementioned United States F-22 air-superiority fighter, introduced in 2005, is often seen on the top of lists of the world’s best fighter jets. It’s also staggeringly expensive at around 339 million dollars a unit and an hourly flying cost of 68,362 dollars. This makes it the most expensive fighter jet in the world. The F-22 has a top speed of around 1,500 miles per hour (2,414kph) and a range of around 1,840 miles (2,961km). Its service ceiling is 65,616 feet (20,000 meters). It packs all the necessary missiles, guns, bombs, to do the same damage as the rest of the planes on this list, but in comparisons was given the stealth advantage over fighter jets such as the Su-35 due to its Beyond Visual Range capabilities. Some pundits have compared finding the F-22 like finding a needle in a haystack, one reason for its vast expense.

This 4.5 generation multi-role fighter was a collaboration between the UK, Germany, France, Italy and Spain, although France wasn’t so keen on some of the design aspects and left to concentrate on building its Dassault Rafale. The ET has been compared to the F-22, and although it lacks the stealth capabilities of the latter it is said to have superior detection systems and so can still find a target from a very long distance. Surprise, surprise, when U.S. and European pilots went up against each other in a training exercise, both came back saying their plane was superior. Each unit costs around 140 million dollars and per hour is around 14,000 dollars to fly. Its top speed is 1,550 miles per hour (2,495 kph) and it has a range of around 1,800 miles (2,900km). Its service ceiling is 65,000 feet (19,812 meters). The ET calls itself the most advanced “swing-role” aircraft ever made. Swing-role is slightly different from multi-role. According to one air defense expert swing-role means having the “capability to switch between different roles within a sortie, whereas multi-role and multi-mission implies the ability to reconfigure air platforms for different roles and missions between sorties.” In simple terms, it’s a multi-tasker.

The Saab JAS 39 Gripen multirole fighter plane is the creation of Swedish aerospace company Saab. According to National Interest the aircraft has a low unit cost – 30-60 million dollars – which makes them a good alternative to some of the more advanced planes featured in this show. It’s not only cheap to buy, but also cheap to fly, at around 4,700 dollars per hour. It still has impressive specs, having a top speed of 1,370 miles per hour (2,204 kph) and a range of 1,983 miles (3,200 km). Its service ceiling is 50,000 feet (15,240 meters). Its payload and radar systems might not be as advanced as some other aircraft on this list, but it can take-off and land in a very small area as well as refuel very quickly. It’s one of the value for money fighters on this list, and it’s certainly in contention for one of the best fourth generation fighters in the world.

This multi-role fighter has been around for some time, but still packs a punch. The F-15 has a top speed of 1,650 miles per hour (2,665 kph) and a range of around 1,222 miles (1,967 km). Its service ceiling is 65,000 feet (20,000 meters). The unit cost back when it was being made in the 90s was 31.1 million dollar, although the upgraded F-15K cost as much as 100 million dollars in 2006. The last iteration is the F-15S. These machines are equipped with excellent digital electronic warfare and radar suites and according to one analyst it “is still more useful than either the F-22 or the F-35 in certain situations.” That situation would be intercepting other jets, but the downside is it’s not so good at playing the hide part in the game hide and seek. If it’s found, though, it’s hard to beat in a dogfight situation.

Russia’s MiG-35 multirole fighter follows its progenitor the MiG29. According to analysts it’s about as nimble as an fighter plane can get, but for its agility it has also had to make some sacrifices. The 40 million dollar plane has a top speed of 1,490 miles per hour (2,400 kph) and a range of 1,240 miles (2,000 km). Its service ceiling is 62,340 feet (19,000 meters). According to National Interest its radar and missile capabilities should make any foe quiver, and it’s thought its optical locator system should make finding stealth fighters less of a problem. Like the JAS 39 Gripen it is often said to be inferior to some of the planes on this list, but in terms of value for money it’s perhaps the best fighter jet there is.

So, which of the aforementioned jets do you think reigns superior? Let us know why in the comments! also share.